Pacemaker is a cluster resource manager. It achieves maximum availability for your cluster resources by detecting and recovering from node and resource-level failures by making use of the messaging and membership capabilities provided by your preferred cluster infrastructure (either Corosync or Heartbeat).

These pieces include the resources themselves, scripts that start, stop and monitor them.

The pacemaker corosync cluster called as pacemaker stack. The relation between kernel DLM (Distributed Lock Manager) and pacemaker stack has been illustrated here. Almost all the Linux kernel by default comes with DLM. DLM provides locking feature which will be used by cluster aware filesystems. The GFS2 (Global File System2) and OCFS2 (Oracle cluster File System 2) are called as cluster aware filesytem. To access single filesytem by multiple hosts you need to have either GFS2 or OCFS2. If not any other filesytem created on top of CLVM volume group required. CLVM stands for Clustered Logical Volume Manager. 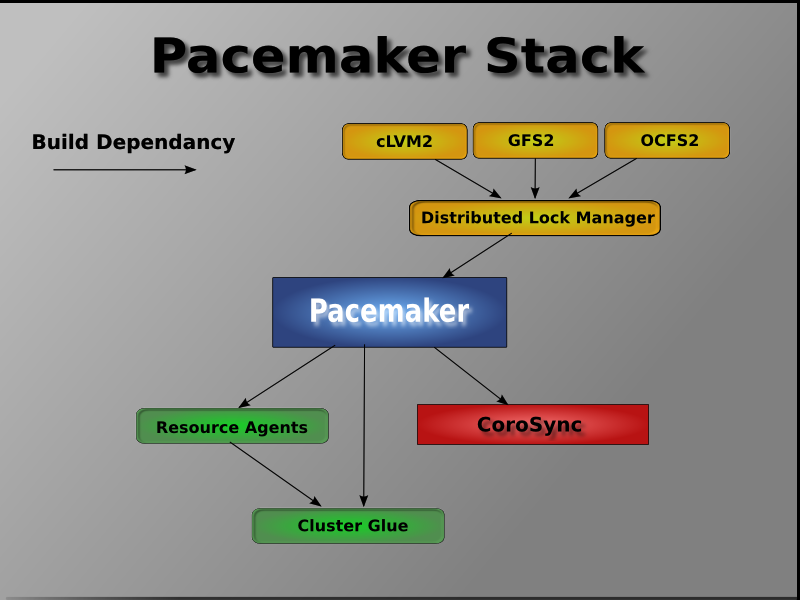 Have a break if you feel stressed. Because lot more still.

Before learning configuration of pacemaker corosync cluster it is good to know about its key components.

The image shows how each component of pacemaker been interlinked.

The Cluster Information Base is an in memory XML representation of the entire cluster configuration and current status. It contains definitions of all cluster options, nodes, resources, constraints and the relationship to each other. The CIB also synchronizes updates to all cluster nodes. There is one master CIB in the cluster, maintained by the Designated Coordinator (DC). All other nodes contain a CIB replica.

One CRM in the cluster is elected as Designated Coordinator (DC). The DC is the only entity in the cluster that can decide that a cluster wide change needs to be performed, such as fencing a node or moving resources around. The DC is also the node where the master copy of the CIB is kept. All other nodes get their configuration and resource allocation information from the current DC. The DC is elected from all nodes in the cluster after a membership change.

Whenever the Designated Coordinator needs to make a cluster wide Change (react to a new CIB), the Policy Engine calculates the next state of the cluster based on the current state and configuration. The PE also produces a transition graph containing a list of (resource) actions and dependencies to achieve the next cluster state. The PE always runs on the DC.

The LRM calls the local Resource Agents on behalf of the CRM. It can thus perform start / stop / monitor operations and report the result to the CRM. It also hides the difference between the supported script standards for Resource Agents (OCF, LSB). The LRM is the authoritative source for all resource related information on its local node.

Resource Agents are programs (usually shell scripts) that have been written to start, stop, and monitor a certain kind of service (a resource). Resource Agents are called only by the LRM. Third parties can include their own agents in a defined location in the file system and thus provide out of the box cluster integration for their own software.

Any service or software configured in cluster is called as resource. For example NFS service, filesystem, applications are resources for the cluster.

The server computer which is part of the cluster called as member node.

Resources are monitored as per configuration in CIB. The CRMd daemon in DC nodes does take decision and initiate commands. The DC node refers policy engine and take decision accordingly.

For example take two node cluster which is configured to provide Apache web service. Cluster does numerous operations. But below are the overview of main actions.

SUSE high availability solution use pacemaker corosync cluster. The basic hardware and software requirement to setup a cluster been listed here. I collected this information from SUSE Enterprise Linux HAE 11 (SLE HAE 11) reference document. Please do not forget to refer your version of support matrix.

Does this whitepaper help you? If you have anything to say, please leave comment below.

Home of Pacemaker and guide documents for configuration  –  http://clusterlabs.org/doc/